The company Katzlberger GmbH has been operating in the field of municipal and industrial waste since 1977. In the beginning they were responsible for the garbage collection of 20 communities in Upper Austria. Since then, the company has developed into a disposal company for non-hazardous as well as hazardous waste. Today about 80 employees are working in different departments, including demolition and earth moving, transport, rental fleet of equipment and of course waste management and recycling.

At the site of the company in Mettmach a waste management center is operated, where garbage as well as collected recyclables are processed and stored. Cardboard and various plastics fractions are compacted into bales for further transport.

The old channel baler no longer managed to process the required throughput of the growing company. Some materials could not be handled at all, for example hard plastics from the garbage collection or agricultural film and agricultural fleece of the surrounding farms.

With particular whishes and requirements, the company applied to Austropressen. In addition to durability, high bale weights, high throughput and material versatility, the energy efficiency of the channel baler was also an important aspect to the environmentally conscious entrepreneur Wolfgang Katzlberger.

Fulfilling all the given requirements, the fully automatic channel baling press APK-ES85 was chosen and successfully commissioned in July 2015. With a power of 2×45 kW the baler reaches 850 kN, a specific surface pressure of 103 N/cm² and a theoretical capacity of
510 m³/h.

The APK-85 from Austropressen met and even exceeded the specified requirements of the company Katzlberger. “Now we can process difficult material like agricultural film without problems. The bale weights of cardboard and plastic film have been increased by more than 50% and the throughput is high enough to even accept orders from other companies.” says Mr. Sallaberger, responsible for the department disposal and recycling.

Every year, the company processes approximately 3,000 tons of cardboard (mostly packaging material). With dimensions of 1.10×0.75×1.2m, bale weights of 600kg are currently achieved (compared to the previous 400kg).

About 1,500 tons of plastics are processed annually at the plant; thereof 800 tons of hard plastics, 300 tons of agricultural film and 400 tons of mixed film.

The bale weights of mixed film could be doubled to 500kg with the new channel baler.

Agricultural fleece and hard plastics could not be processed previously because of deadlocks and blockings in the pre-press flaps. The special and patented cutting unit of Austropressen guarantees that also this kind of material can easily be compacted into dense and stackable bales. 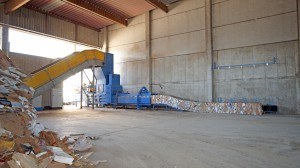 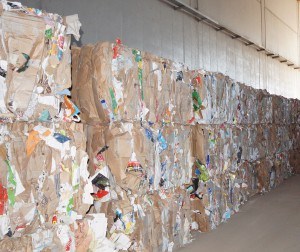 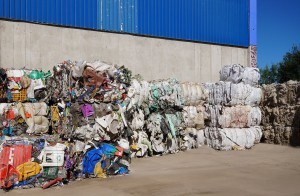 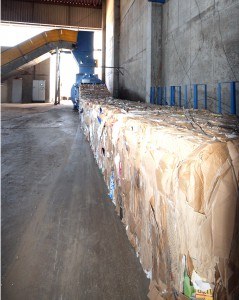